Mattermost- An Alternative To Slack Mattermost is the brand new and cool alternative used by organizations. In a world fueled by digitalization, it is of prime importance that businesses collaborate in the virtual environment as well. Slack understood the need and so, in 2013 it created a digital workspace for employees to send messages privately or in groups, share files, and integrate third-party programs. It entered the Software-as-a-Service (SaaS) world as a platform where developers, corporate employees, and gamers can communicate with each other and in 2019, reported 10 million daily active users.

The strongest feature of the app is its extensive third-party app directory with more than 2000 integrations. However, even with the Enterprise Grid, it does not tackle all problems in the workplace which is why Mattermost became a strong competitor. Mattermost is an open-source, private-cloud messaging platform designed to keep the needs of the enterprises in mind and in many ways, is superior to Slack. According to CEO Ian Tien, Mattermost is a creation “by developers for developers.”  Mattermost benefits are countless.

Slack, which is the shortened version for Searchable Log of All Conversation and Knowledge is a cloud-based, SaaS messaging system made to maintain online workplace communication.  It has many redeeming qualities, some of them being maintaining an archive of all conversations that can be searched later, sharing files, integrating apps, having an open API for developers to build new apps for it. Plans cater to both teams and enterprises. It is a good platform for businesses that are looking for a more streamlined workflow and improved communication amongst team members, and do not have any ownership, privacy, or security concerns. It is also ideal for companies that wish to scale the messaging solution or integrate it into their existing systems. Mattermost benefits are countless compared to Slack. A business should choose Slack if they have the following things in mind:

An open-source solution, Mattermost acknowledges the organizational problems that most businesses face with workspace communication tools when it comes to the issues of security, privacy, scalability, and legal consent. Mattermost benefits are countless. The practical approach of the messaging platform has secured for itself funding of $50 million to create more plugins and integrations.

It has two versions-

It is a private-cloud workspace solution designed for users with a non-technical background but with the necessary IT skills. It equips on your desktop and as well as mobile devices and brings workplace communication into a single environment. Mattermost is also equipped with instant search, robust archiving, and a selection of third-party integrations. Mattermost benefits are countless.

It has all the functionalities of the Team Edition with a few added features such as advanced security and higher-grade messaging. It also comes with options for scalability tools for users. 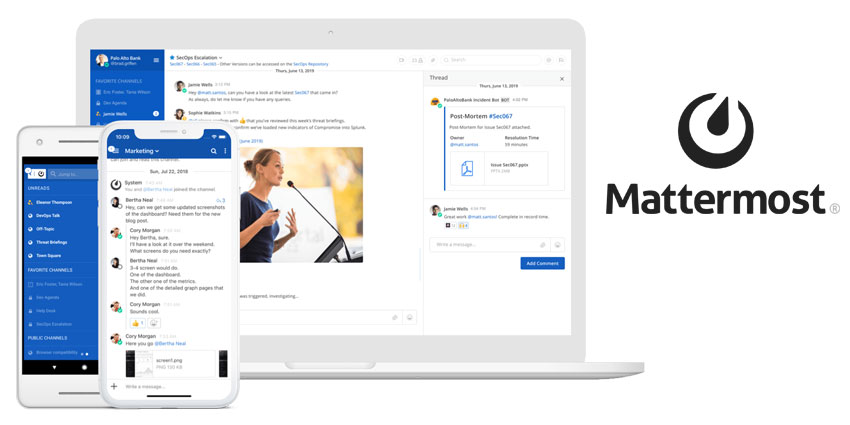 It can deploy in private, public, and in hybrid clouds and is the optimal choice for businesses that require more from their messaging solutions. You can install it behind your firewall in a trustworthy environment with security parameters. This will ensure that SaaS services cannot learn about your business matters or activities.

This setup further ensures compliance with laws such as consumer data protection and GDPR. These are the reasons why Tesla Motors decided to replace Slack with Mattermost for its team of developers; it comes equipped with more privacy, enterprise licensing, and private cloud security.

Since enterprises can access the source code, APIs, drivers, open-source integrations, samples, and more, they control the customization of the platform. The single-tenant private cloud architecture also offers horizontal scaling and high availability. Uber needed a better messaging solution that could evolve along with the growing company.

After testing the available options, Uber chose Mattermost due to its scalability, redundancy, privacy, and enterprise licensing. Uber created around 20,000 chatrooms that had the strength to support conversations between individual employees and between groups. The new and improved solution supports 32,000 users and handles around 700,000 messages every day. Mattermost benefits are countless.

Wargaming, chose Mattermost as an on-premises solution for workplace communication that can serve more than 180 million players at once. Its highly-available and scalable architecture has allowed Wargaming to grow and evolve. You should choose Mattermost if you are looking for:

The messaging solution that is perfect for your business depends on your needs and preferences. When it comes to productivity, Slack is the clear superior as its hosts over 2000 integrations while Mattermost only has a few hundred.

Some small-scale businesses may find Mattermost suitable due to its out-of-the-box approach towards messaging. Others may find the Enterprise Grid more accessible. Whatever your preferences, if there are any concerns about content ownership, security, privacy, and want scalability as you evolve, then Mattermost is the one for you. Mattermost benefits are countless.

At Jobspikr and PromptCloud, we use certain plugins that allow for better workspace collaboration, namely, Standup Raven and BBB. Standup Raven, a Mattermost plugin used to track the daily activity of employees. Big Blue Button or BBB is an enterprise plugin used for video conferencing and audio conferencing. It allows you to add multiple people to the call and also has share screen options that allow you to show people your screen, you can even record the calls for later reference.